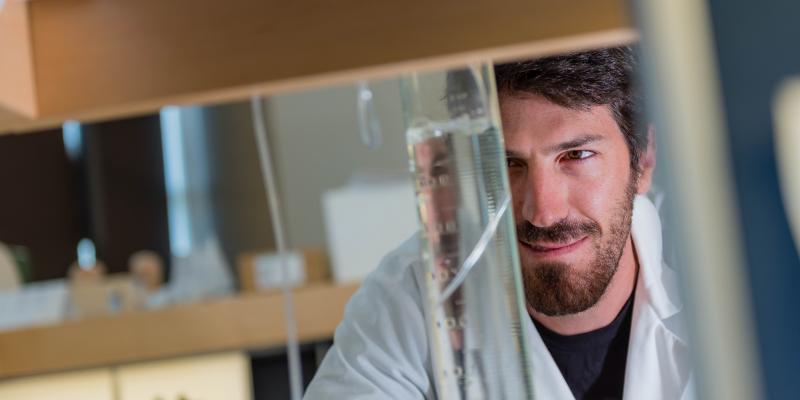 Two new studies reveal insights into immunometabolism in the brain

The MacVicar Lab has published two papers today looking at immunometabolism in the brain, an exciting area of research that has gained momentum over the past few years. One is a review article in Trends in Neuroscience highlighting recent breakthroughs implicating microglial metabolism in neurodegenerative diseases, and the other reports novel mechanisms of neuroinflammation in the brain. We chatted with authors Dr. Louis-Philippe Bernier and Dr. Elisa York about why this is such an interesting research area and where the field is headed.

Louis-Philippe: Immunometabolism is how the metabolism of immune cells affects their function. In the review, we were specifically looking at the metabolic regulation of microglia which are the immune cells of the brain. Immunometabolism has been a hot topic in the peripheral immune system for a long time, but more recently people have started to look at this process as it pertains to the brain, so it seemed like a good time to review the recent advances reported in the literature.

Elisa: We know that immunometabolism plays a part in many neurodegenerative diseases, such as Alzheimer’s, Huntington’s and Parkinson’s. But it’s been challenging to study because if you take microglia out of the brain, they change their function, which means we’ve needed to find ways of studying them while they’re still in the brain environment. That’s what our lab, along with other groups in the field, have started doing, and it’s revealing novel mechanisms by which microglia are actively involved in these neurodegenerative diseases.

WHAT WAS THE MOST INTERESTING TAKE AWAY FROM THE REVIEW?

Louis-Philippe: The most interesting aspect is that research has shown how important immunometabolism is in neurodegenerative diseases, and more importantly, how it brings into focus potential new targets to treat these diseases. It’s clear that metabolism is actually driving behaviours at a cellular and system level, which is getting people excited about this type of research. Microglia are involved in pretty much every brain disease, but we’re still learning what their exact involvement is.

Elisa: I think historically people have thought metabolism just relates to cellular energy. But we’re seeing that it’s essential for the cell and incredibly intertwined with how the cell functions, which I think is one of the coolest parts. The reality is metabolism is controlling the entire cell function.

WHAT ARE SOME OF THE LATEST METHODS THAT ARE BEING USED TO STUDY MICROGLIA?

Elisa: We have a section in the review focused on novel tools to study microglia, many of which didn’t exist even ten years ago. One approach that our team uses is to image in real-time the molecule NADH which is involved in metabolism and gives off light so it can be detected. The state that this molecule is in is associated with different steps in metabolism. I can image the microglia and measure how much light is generated by NADH, and then use that to interpret what kind of metabolism microglia are using—for example, whether they’re eating sugars or proteins.

WHAT ARE SOME OF THE NEXT STEPS WITH RESPECT TO IMMUNOMETABOLISM IN THE BRAIN?

Louis-Philippe: The next phase for many researchers will be trying to figure out how microglia are regulated by their metabolism, and then using this to eventually manipulate their metabolism to change the way they act in disease.  Say for example we discover that the metabolism switch microglia undergo actually pushes them to be proinflammatory and that this drives disease progression. The next step would be to alter their metabolism by changing the sugars or proteins they consume, which would basically change their function. Our review summarizes a significant amount of data gathered by labs around the world, and we can now observe a trend, a common link to the microglial adaptation to different diseases like Alzheimer’s, Parkinson’s or Huntington’s disease. It’s these metabolic microglial changes that are common to multiple neurodegenerative diseases that provide an exciting new therapeutic avenue that could lead to new potential therapies.

A similar regulation system exists in cancer cells which has been extensively studied. Basically, cancer cells become glutamine-addicted, so researchers have been trying to change the metabolites they have access to as a way of killing the cancer cells. If we can figure out how microglia promote disease progression, we can change the metabolites that they have access to which would ultimately change their function and hopefully halt disease progression.

WHAT PROJECTS IS THE MACVICAR LAB WORKING ON RIGHT NOW WITH RESPECT TO IMMUNOMETABOLISM?

Elisa: We just published a paper today in Glia which describes the mechanisms by which microglia contribute to neuroinflammation and alter brain function. When microglia respond to immune stimulation, their metabolism changes and they release a molecule that disrupts neuronal communication. If we stop microglia from metabolizing sugar, it also prevents them from releasing this molecule, and neuronal communication is no longer disrupted. This paper and the TINS review suggest that metabolism may be a promising therapeutic target for treating brain inflammation, like we see in many neurodegenerative diseases, such as Alzheimer’s disease.

Louis-Philippe: One project we’ve been following as well is investigating how metabolism is affected during stroke. When you have a stroke there’s less oxygen and glucose available, so we’re looking at how microglia behave in the acute moments after a stroke. Essentially, we’re wondering how they behave and how their metabolic flexibility and immunometabolism regulation help in post stroke recovery. While the focus so far is mainly on neurodegenerative diseases, we are seeing that the role of microglial metabolism is a common thread in many pathologies.