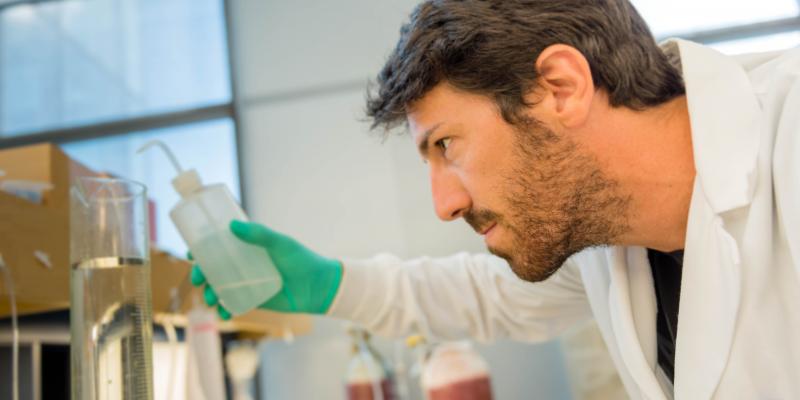 An emerging area of research called immunometabolism investigates how the metabolism of immune cells affects their function. But for the most part, this area remains largely understudied when it comes to the brain because it’s such a complex structure.

A new study published today in Nature Communications led by Djavad Mowafaghian Centre for Brain Health Research Associate Dr. Louis-Philippe Bernier (pictured) in Dr. Brian MacVicar’s lab is one of the first to look at immunometabolism in the brain. The team studied the metabolic plasticity of microglia, the immune cells of the brain which act as the main line of defence in the central nervous system. These cells typically use glucose to function, but a few years ago Dr. Bernier noticed that when he removed glucose from his experiments, the microglia kept functioning normally.

“It’s been known for a long time that if you take glucose away from neurons, they stop functioning within 15 minutes, so it was interesting that the same thing wasn’t happening with the microglia,” says Dr. Bernier.

He decided to study this further to figure out how these cells were able to continue functioning in a glucose-limited environment, and found the microglia switched to metabolising glutamine—an amino acid found in high concentrations in the brain—as their main source of energy.

“This finding makes sense because microglia are supposed to be able to function when things go wrong—that’s literally their job, to notice that something is wrong and to try and fix it,” says Dr. Bernier. “In order to do that, they need to be able to use any energy or fuel source they can find.”

Microglia are especially difficult to study because they act much differently when they’re removed from the brain. This makes sense, seeing as their role is to detect any changes in their environment and respond accordingly. When they’re placed in cell culture, they sense this change and react differently than they would inside the brain.

“People have studied microglia in culture for a long time, and it’s still a great way to test some aspects of microglial function” says Dr. Bernier. “But since these cells act very differently in culture, the findings don’t always relate to what’s going on in a real-life situation.”

It’s thanks to state-of-the-art imaging equipment that researchers like Drs. Bernier and Elisa York, co-author on the study, are now able to study these cells in their native environment. For example, the two-photon microscopy approaches Drs. Bernier and York used allows the brain to be imaged directly to see how microglia act and interact with other cells in their natural environment.

The findings from this study could have broad implications when it comes to providing insight into disease. Glucose levels can decrease in stroke as well as diabetes, and research has shown that energy metabolism is impaired in many neurodegenerative diseases. Having a better understanding of the specific energy requirements of microglia could have important implications for brain health.